Hidden Prey is out!

Enjoy a little excerpt of Hidden Prey on this fine release day!

Something soft and firm brushed Tori’s lips and she stirred. A mouth moved over hers in a long, languorous kiss that stole her breath. 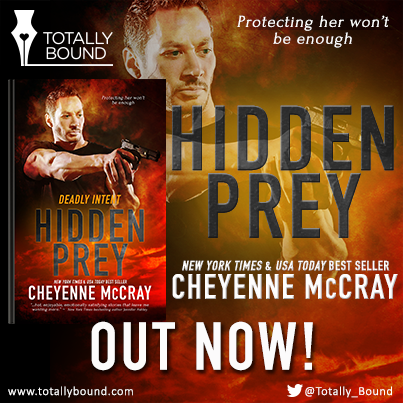 She was dreaming about kissing Landon and it was the most beautiful thing she could imagine at this moment. God, how she wanted to trace his abs with her tongue and her fingers before she kissed him even more deeply.

If he were real right now, she would see the length and girth of his erection before taking it in her hand. She would feel the softness and the steel of it, then lick a path from the tip to the balls and back. She would love to go down on him, take him to the back of her mouth. The feeling would be a powerful one, knowing she had control of his pleasure.

So real. The kiss felt so real. He sucked her tongue before taking her bottom lip into his mouth and lightly biting it and licking the soft flesh, something that drove her crazy.

The kiss deepened and became more frenzied, more urgent, as she answered it with her own kiss. A warm hand cupped her cheek, a thumb stroking up and down, while holding her still so he could kiss her hard and deep.

She let out a soft sigh as the kiss ended. Her lips felt moist and they tingled. Her eyelids fluttered and then in the near darkness she found herself looking into Landon’s gaze.

Her eyes widened and she parted her lips to say something, but he put his hand over her mouth. Was something wrong? No, nothing could be wrong. Everything was right, so right. His hand smelled like soap, and she breathed in his scent. He smelled clean like he’d just taken a shower, yet his scent was musky and now familiar.

The light was dim, but she could still make out the desire, want, and desperate need in his gaze. The feeling it gave her was deep and powerful…it was so potent to be wanted. She could see it in the way he looked at her, the way he’d kissed her.

“Shhh.” He skimmed her cheek with his knuckles and threaded his fingers into her silky hair before holding her tight. “I’m sorry.” His voice was husky with need, deeper than usual and almost strained. “I looked in to check on you, but you looked so beautiful that all I wanted to do was kiss you. I don’t know if I can keep my hands off of you now.”

Earlier he’d said he was going to protect her and he wasn’t going to let her go. A strong sensation of him claiming her as his own was heady. At this moment she wanted him to claim her, wanted to be his.

Find the links for Hidden Prey at all your favorite ebook retailers here!

Be sure and let me know what you think of Hidden Prey!